“Police today managed to impound 200 liters of illegal brew in the sprawling Kibera slums.The OCS Mr.Kamau together with his boys then went ahead to pour the brew,in a rather shocking turn of events the owner fainted as witnesses watched in awe as the contents of the brew were laid before there very eyes”

It’s the 7pm News and every one is glued to the screen in utter amazement as some crude brown liquid  purported to  be alcohol is being poured.Then the comments ensue

“I wonder how people even drink this shyt,i mean in the worse case  scenario kunywa Keg au Naps”

The truth of the matter is AkaJaymo has indulged  in this crude delight.In some far away town far far from Nairobi.

It’s a shady lil town just before Mombasa,am talking about Voi. Now for those who may have flanked or missed a couple of lessons in Geography,let me tell you a lil about Voi.

Voi  is a dusty town on Mombasa road just before you fika mombasa.It boasts of one stored building that houses pretty much every thing  in the town,am talking about Equity Bank,the only discent joint(Millys),a couple of fancy shops….you get the picture.

After downing a couple of decent drinks me and Marto decide to do it local am talking coasto local,Mnazi baabie.So we head south East (Google Maps can confirm) of the town.To a little Village called Mariphenyi and deep in the heart ,a brewery that boasts the best Mnazi you ever drunk according to the Inhabitants.

Now just as anyone who has done any traveling will tell you,every shady joint has it’s Fixer,that  go to guy.The guy who promises to get you the realest of whatever it is you are looking for at the best imaginable price.

Van-der-Sa  was that guy;i swear the guy must have smealt the Nairobi on me for as soon as i was within a whiff of the joint he appeared.Promising to get us the best Mnazi at the best price for his purpoted long relationship with the propriator.He had the  fluentest Swahili you ever heard.

Anyone who knows what i got in Swahili while in high school will attest that the grade was just enough to get  me to campo.So it took me a while to process what he was saying,all the  while looking me dead in the eye.

Before my response could be given he interjected my thought process

“Najaa” I responded in the fakest swahili accent you ever heard,this coming from the guy who thought Aitha was synonymous with either.

So there we were, seated on some stool like contraptions  feeling all Domestic touristish.

The proprietor/brewer walks up to us and inquires what our poison was.

Ba what!!!!Even Google translate was at lack for a definition.So i enquire what Bangara was.

“Pombe ya wishwa.”So i look at Marto and just like he was reading  my mind he asks “Wishwa ni nini??”

By now she can tell we are rookies in her alcoholic joint.So i ask her name just to act the friendly type and if its possible for me to see how the Bangara is made.

Am now telling Marto how we should make our exit,for fears of being drugged but you know how beer  pressure works.I find myself glued.

She comes back with  a bottle with some whitish stuff in it. The irony here is  that it’s a Viceroy Bottle,the contents being nothing close 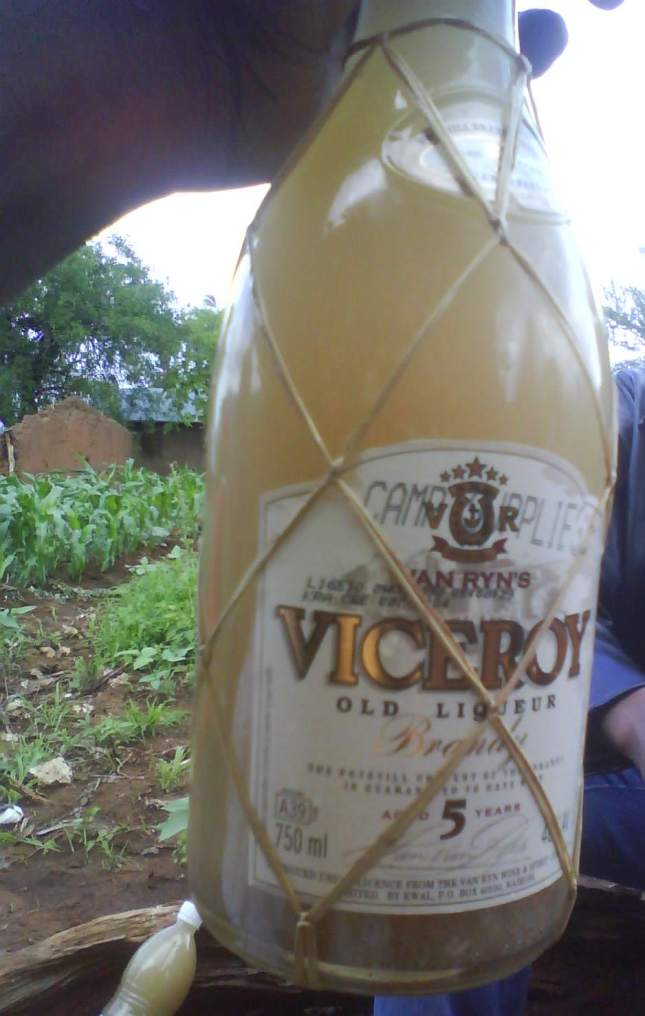 I take the first sip,don’t ask me why but i just did,then the second and third,not bad-passing it over to marto who does the same thing.

30 minutes later am singing,being in  coast i decide a catchy swahili tune will do

The curiosity bug in me is itching,i really want to know how Bangara, or what ever it’s name was is prepared.Anything that can get me drunk in under 30 mins deserves my curiosity.

So i follow Pamela to where the stuff is being made and am hit by total surprise,the kind that gets you sober ASAP

The brewery(for lack of a better word) is dingy by any standards. Even those kibera ones are better.Am guessing her client base hasn’t been in here.There is a big ass drum in the middle,dark in color menacing look.With what appears to be soot on the side.

Its a mud structure with more smoke than a Jamaican Bong.She is holding a stick,she calls it her sturing stick.Allow me to tell you more about this stick.

In the Brew business you are as good as your stick.A brewer respects his stick because although it takes away people’s lively hoods and even wrecks families in its wake it feeds  hers.The amount of respect  accorded to this stick is admirable.The stick never leaves  the brewery. It’s been in her family for several years now.It’s an ugly looking piece of wood,angry wood,drunk wood.Its never washed.she only runs water over it and puts it away.

She dips it and sturs some brownish looking concoction  exchanging casual talk with some drunk fella outside.Am not listening am more In shock.I’m Actually at the door not sure whether to enter or stay ouside.

The ugly stick is working its  magic,bubbles are rising, the smell  is sickening,the heat is getting to me,the booze to…..

The next thing a bratha… had passed out.In a make shift brewery in  some shady village in VOI.

Posted by akajaymo on May 16, 2011 in Humour, MEMORIES., Reflections, true stories